It is inevitable that during the past few months of lockdown many people have turned to baking. Not only have we had the time to do it, but I think it’s comforting and therapeutic to lose yourself in the process of baking. My hungry teens have become spoilt with the weekly baking.. obviously they show their appreciation by eating it all within a few days, and one of them recently remarked how nice it is to have home baked goodies in the house most of the time!

Sourdough and banana bread seem to have taken the nations poll positions as the favourite items to bake,  and even I have become that sourdough obsessive, nurturing my rye starter and doing a twice weekly bread bake. Banana bread has always been a house favourite – I swear by the Nigella recipe, just leaving out the walnuts and sultanas, swopping white sugar for soft brown. I did try using wholemeal flour mixed with white, but the result was a little dry so I reverted to white.

At the beginning I baked cinnamon rolls with varying success – that was definitely a comfort baking scenario as the smells of warm cinnamon and butter are enough to cheer anyone up. Cheese scones were also on the menu for super savoury snack. I used the Felicity Cloake recipe for these and changed the cheese/chives/wild garlic depending on what was in my fridge.

The bread story has continued with a foray into bagels which I had always thought would be too much hassle with the boiling and the baking. But no… its another step, but the homemade bagels taste so good that its worth the effort! I used the BBC recipe, but the topping is Trader Joes Everything bagel mix which really made them like the New York bagels we love.

Slightly sour fresh apricots which came in my organic veg & fruit box delivery made their way into an Apricot Crumble cake, whilst the surfeit of oranges in my fridge became an Orange and Almond cake. This orange cake has been a favourite of mine for years, inspired by the Orange and Poppyseed cake i first encountered when I worked at The Continental Deli in Hong Kong. Its such a simple recipe, and has the added benefit of being gluten free. I have substituted lemons and mandarins for oranges, and you can boil the fruit up to 2 days in advance and leave it in the fridge. And its all made with love.

Wash the oranges and bring them to the boil in a large saucepan of water and gently cook for two hours.

Leave the oranges to cool, before slicing in quarters and removing the pips.

Pulp the oranges in a food processor.

Beat the eggs and gradually stir in all the remaining ingredients, including the orange pulp. Pour into the cake tin and cook for about an hour, until the cake is golden in colour and has risen.

Transfer to a wire cooling rack, keeping the cake in the tin. When the cake has cooled, carefully remove from the tin and serve cut into slices. It goes beautifully with creme fraiche or Vanilla ice cream.. or even just on its own. 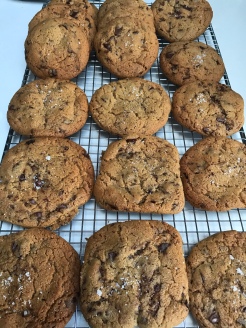